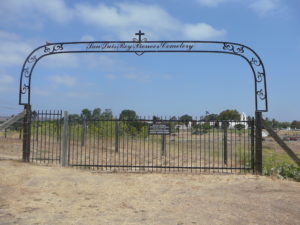 A small cemetery sits on a knoll in the San Luis Rey Valley across from the Mission San Luis Rey. Few notice it is even there and its anonymity has perhaps contributed to its near demise.  While commuters busily drive Mission Avenue or Highway 76 they scarcely look up at the resting place of the valley’s pioneers.  They may never notice when vandals littered the area, pushed over headstones or even worse, dug into the graves and even stole the headstones, the very record of those buried there.

The San Luis Rey Township was a vital, busy place in the 1870’s.  Many families came to settle around the area to homestead.  Families like the Goldbaums, Lanphers, Libbys, Bordens, Hubberts, Freemans, and Myers.  The township had a post office, hotel, a newspaper called the “San Luis Rey Star” and a general store.  It also had a school where the First Christian Church met on Sundays.

At that time there was only one cemetery, that belonging to the Mission San Luis Rey, which of course, was reserved for Catholics.  The protestant (or non-Catholic) settlers had no burial place for their dead.  Sometime in the late 1860’s land was designated for a cemetery on a small hill, just southwest from the Mission.  The first known burial in this cemetery is that of one-year-old Catherine Foss, who died in 1869.  In 1875 Isaac Kolb donated the land to “reserve for public burying ground or cemetery where the same is now used for that purpose”.  The following year the cemetery was deeded to the San Luis Rey School District “to hold in trust for a public burying ground”.

Andrew Jackson Myers and his wife Sophia settled in the San Luis Rey Valley around 1875.  In 1881 Myers would later receive a grant that would be downtown Oceanside.  Although he is known as the founder of Oceanside, he was still a pioneer of the San Luis Rey Valley, and so was buried at the cemetery when he died in 1907.  He was laid beside his wife Sophia and four of their children, Alfred, Etta, Maggie and Andrew, Jr.  Only two of those headstones remain today, that of Maggie and Andrew, Jr., both of whom died very young.

Over time the number buried there increased.  Early lists estimated 84 burials, but recently, with more indepth research, that number has risen to 120.  Other names include Lusardi, Cerda, Salgado and Meza.  It is not known if an actual plot map of the cemetery ever existed.  In 1989 Al Cerda, Jr. drew a map according to existing records.

The San Luis Rey Township was a tight-knit community.  The settlers knew where their loved ones rested and must have assumed that someone would always know and never planned for what lay in store for the cemetery or the fate of their own final resting place.  The San Luis Rey School District, although the legal trustees of the cemetery, seem to have kept no official record or count.  School Trustee Shirley Woodruff filed the tax exemptions yearly and was responsible for pointing out available burial sites to families looking to bury their dead.  He was for years the cemetery’s only “caretaker”. 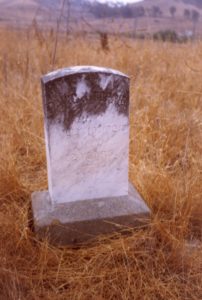 Headstone of David Kitching (taken in 1989)

In the late 1940’s the Oceanside Unified School District took over the San Luis Rey School District, and unknowingly became trustees of the cemetery.  Shirley Woodruff, then retired, still continued to file the annual tax forms for the cemetery until his death in 1989.  Shirley was buried in this cemetery in the plot that was reserved for him several decades ago, alongside family members.

As the population grew and construction increased in and around the valley, the cemetery on the hill seemed to fall into the cracks.  Progress went unimpeded and no one seemed to notice or care about its fate as vandals frequented the cemetery, leaving beer cans and litter strewn about in the cemetery.  Sometimes the wooden crosses were taken out of the ground and tossed and gravestones were pushed off their bases.

The Oceanside Historical Society formed a cleanup in 1991, calling on descendants of these pioneers, as well as their own members.  Marines from Camp Pendleton also volunteered and after much effort, toil and sweat, bags of trash were removed and entire dumpster of brush and weeds were cleared and some headstones placed back on their bases.

However, in 1992, the unthinkable happened.  Three graves were desecrated by grave robbers or thrill seekers. Whatever the motive, it was clear that this little cemetery was very vulnerable.

Several headstones have been stolen since 1989, namely the markers of Leovi Cerda and Benjamin Neff, as well a “double” headstone for William E. and Catherine Libby.  Also stolen was one of the oldest and most unique headstones, that of Steven D. Lanpher, who died in 1891. Betty Lanpher Kopcso filed a police report after she had visited the cemetery and discovered her great-grandfather’s headstone was no longer there. Weighing nearly 400 pounds it must have been quite a feat for robbers to lift the headstone and remove it from the cemetery.

We are pleased that this story has a “happy ending” for the cemetery and for Betty Kopcso.  On December 2, 1996 the Historical Society received a phone call from the Oceanside Police Department. It seems that a woman in Fallbrook had heard about the missing Lanpher headstone and realized that it was the very headstone that she had sitting in her front yard.  She had the heavy granite stone loaded into a van, drove to the Oceanside Police Station and told a police officer that she wanted to turn it in.  She did not want to give any details, only that she had purchased the headstone for $100.  It took five police officers to remove it from her van and place the headstone into “evidence”. Its journey is complete as it is now back in its intended home, the resting place of pioneers who came from all over the country to settle in the quiet little valley and “discover” what we now enjoy and know as San Luis Rey in Oceanside.

The Oceanside Historical Society armed with new fervor again mustered to take care of this orphaned cemetery.  In September of 1996 a crew was hired to clean and mow the cemetery and is now done on a regular basis.  It is our hope to discourage would-be vandals but also to extend information regarding the history of the cemetery and heighten the community’s awareness. 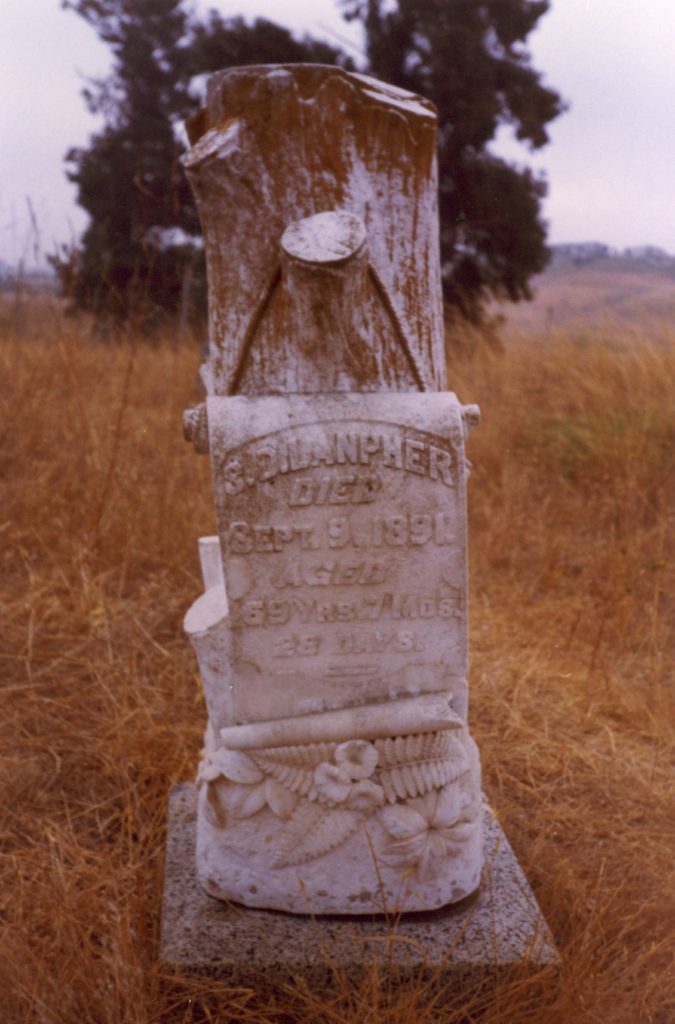 The Society has asked for help from its members and the descendants of the deceased pioneers to cover the cost of clean ups and maintenance.  Support came in slowly at first, but the momentum built with more attention and publicity.  A small fund was established through the Society to help maintain the cemetery. With a grant from the San Diego County Board of Supervisors, a sizeable donation from the Oceanside-Pacific Kiwanis Club, and generous donations from members and descendants, a new fence was erected that will help to protect the cemetery from vandals and also preserve the cemetery for future generations.

Family members have replaced markers that have been lost.  Cement crosses have been erected for Leovi, Cerda, Lucia Nares, Simon Abilez, Jr., Alfred Freeman and Archibald Freeman. A memorial to fallen Oceanside Police Office Dan Bessant was erected there by his family. The Oceanside Historical Society placed a memorial headstone for Andrew Jackson Myers, founder of Oceanside.

We encourage concerned family members and residents to contact the Oceanside Society Historical for information.  We greatly appreciate any support in maintaining this precious historical cemetery. Please note that the cemetery gets mowed at least once a year, typically in the late spring after the rainy season. The Pioneer Cemetery was not meant to a memorial park with manicured lawns and shrubbery. It is lush and green in the spring, brown in the summer with occasional wildflowers — it looks much as it did 150 years ago. 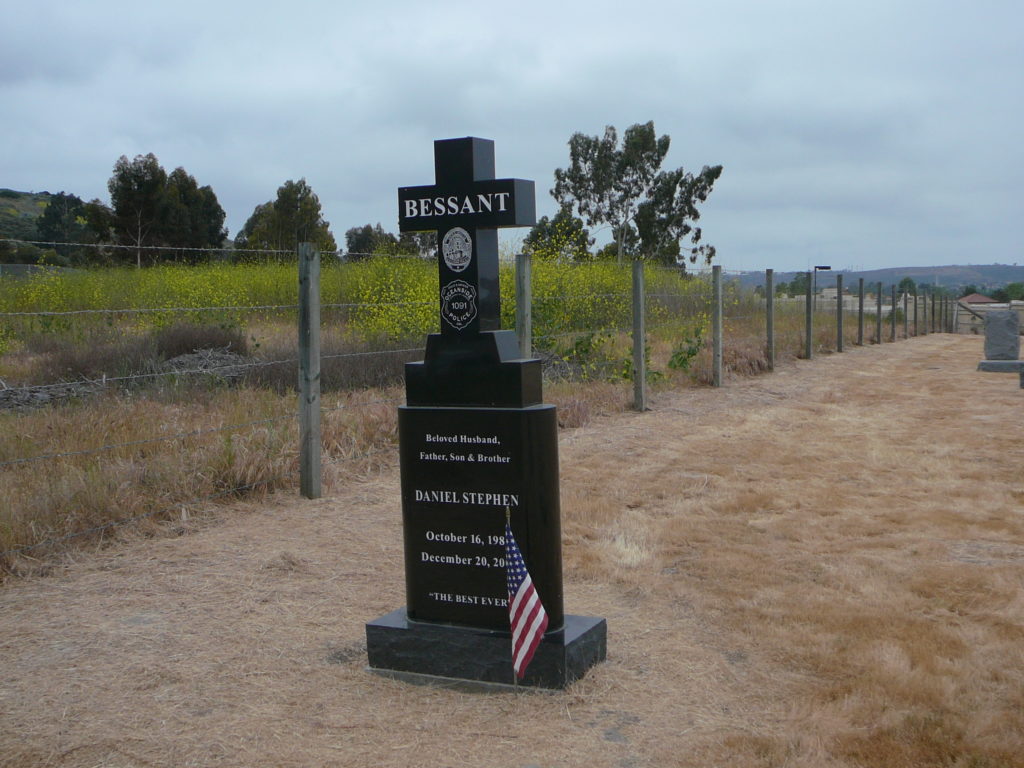