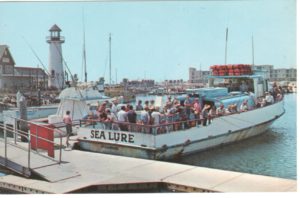 In 1958 General Ridgley stated he would “interpose no objection to the concept” of the Oceanside Harbor constructed on Camp Pendleton Property.  That year the Corps of Army Engineers requested a feasibility study of the proposed harbor.  A delegation of Oceanside officials visited Washington D.C. in December of 1958 to discuss details with U.S. Marine Corps, the Bureau of Yards & Docks and the Secretary of the Navy.

The city delegation met with Camp Pendleton officials in March of 1959 regarding a lease of 68 acres upon which the harbor would be partially located.  Later that year City Attorney Dale Austin and Mayor Erwin Sklar were authorized to meet with congressional representatives and the following month Camp Pendleton transferred the needed 68 acres to the City for one-half of appraised value.

Erwin Sklar was instrumental in the development of Oceanside’s small craft harbor.  Sklar served on the City Council for twelve years from 1956 to 1968, during which time he also served as Oceanside’s mayor and deputy mayor.  Asked what politician in Oceanside got things done, no matter how difficult, David Rorick replied, “You only had one politician in that category in the city — that was Erwin Sklar.  That man did more for the city personally, than anybody else we ever had in the council.  He’s the guy that engineered the harbor; he’s the guy that made the city act in government as a city should. He was always able to persuade people to support his ideas.”

Additional land was also needed from Beachlake Trailer Park and subsequent negotiations with Beachlake Corp. for 32.6 acres began.  Beachlake was a popular recreation and camping spot since the 1930s and owned by developer and former city councilman Albert Zaiser.    To acquire land for its new harbor, the city made a deal with Zaiser, essentially exchanging land for the needed property immediately north of the San Luis Rey river mouth.

With the gaining momentum, Oceanside voters overwhelmingly approved formation of Harbor District in 1960.  The Board of Directors of the Oceanside Small Craft Harbor held their first meeting on February 11, 1960.   With enthusiasm running high, the first Harbor Days was held that year at the Del Mar Boat Basin before the harbor was even built! 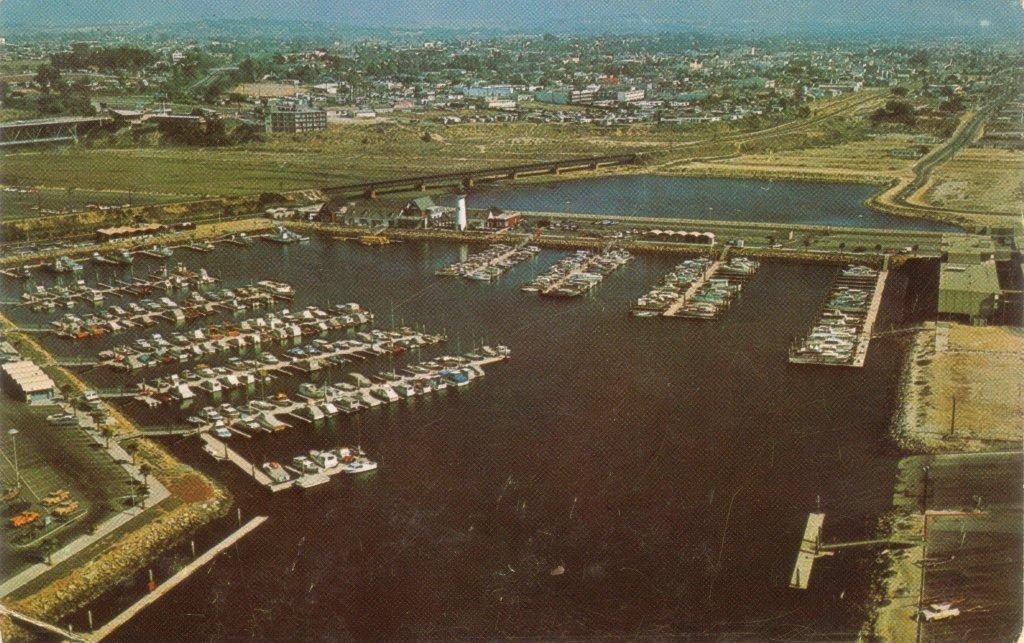 Cox Brothers Construction was the successful bidders for the first construction and the contract to clear away land for 300-foot groin and floodwall at a cost of $396.400.

The Oceanside Yacht Club was founded in 1963 shortly after the harbor opened.  The founders met in a small rented office until the present building was completed in 1965.  The first Commodore of the Yacht Club was Robert Welden; 2nd, John Steiger; 3rd, Byron Jessup; and 4th, Monte Yearley.

On January 16, 1964, ground was broken for a $300,000 fishing village-style shopping center with a six-story lighthouse.  City officials along with the developer, Isaco Inc. of Beverly Hills, participated in the ceremony.  Cape Cod Village restaurants became a popular spot frequented by movie stars coming from Hollywood before heading to Del Mar that included Preston Foster, John Wayne and Jimmy Durante.

Richard Helgren founded Helgren’s Sportfishing in 1979, and it continues to be the lead among the harbor’s attractions, which take fishermen out to sea and tourists to whale watching adventures.   Prior to Helgren’s, the McCullah Brothers operated Oceanside Sportfishing, Inc. The enterprise was relocated from the Oceanside pier to the harbor shortly after its opening.

The Harbor is currently home to several restaurants as well as gift and souvenir shops, a deli, ice cream and sweet shop.  The beaches are the widest in Oceanside and the Harbor offers water recreation of all kinds, including outrigger canoes, kayaking, paddle boarding, fishing, sailing and more.

Since its opening over 50 years ago, the Oceanside Harbor is one of Oceanside’s most popular spots with tourists and residents alike.