Only some four years old, Oceanside has made most remarkable growth. It lies on the coast at the mouth of the San Luis Rey river, forty miles northwest of San Diego, and some four miles from the old Mission of San Luis Rey. Here is the junction of the Santa Ana branch of the California Southern Railway, and here the terminus of the San Diego Central, via El Cajon, Poway and Escondido, and it is on the surveyed line of the extension of the Southern Pacific. Behind it stretches the great and rich San Luis Rey valley, whose fertile fruit and farming country promise a large future interior trade, already so far toward realization that various San Diego merchants have found it profitable to establish there branch business houses.

Oceanside is the natural southern port and outlet for San Bernardino, Riverside, San Jacinto, and the rest of the immediate country to the northward. It is also the natural outlet for the fine valley traversed by the Escondido branch of the railway, which embraces Buena, San Marcos and Escondido. It is the western outlet for the San Luis Rey valley, containing 20,900 acres of the richest land in ; a section rapidly filling up with thrifty people, who contribute largely to commerce. Moreover, to Oceanside is tributary all the country southward as far as Encinitas.

The Oceanside post office is the distributing office for Escondido and all the country tributary to that point, and hence it has become quite an important item in the post office service. Mr. Weitzel, the postmaster, had to report for the year ending September 30, 1889, a money-order business of $13,000 besides a good business in stamps, box rents, etc. 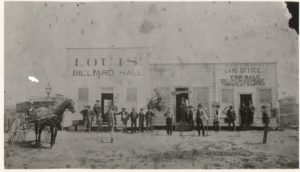 A city charter was adopted in July 1888. The inhabitants are between 600 and 700, and they are for the most part of a high order of worth, and moreover very enterprising and aggressive in a business sense. Large neighboring tracts are being opened up and piped to water by the San Luis Rey Water Company, which is one of the most notable institutions of the city. This organization is opening up a vast field of back country territory, making to bloom land hitherto regarded as almost worthless, and greatly increasing the value of land already under cultivation, by piping water to hundreds of thousands of acres. Besides this, the company purposes to furnish power for manufacturing purposes, utilizing for electric currents the power of their immense sluice-ways, through which the water falls for hundreds of feet; and thence they will convey the power to factories, grist-mills, canning-houses, etc. Hydraulic engineers say that this company will have 65,000 horse-power available. And whereas by the cost of fuel it now costs about $100 for every horse-power used of mechanical power, the new enterprise will be enabled to furnish power at one-fourth that rate. This little seaside city already has various robust and flourishing manufactories, and industries which would be creditable to any long established settlement.

The Oceanside Mill Company is an institution of which the city may well be proud. It manufactures sash, blinds, doors, boxes, etc.; carries a full line of wood working machinery, and does all kinds of woodwork for house furnishing. It does a large business in bee material, including hives, boxes, etc. At one time this year the mill ran for two months on this branch of the business alone. Here tanks are manufactured for all the surrounding country, from Oceanside to Smith Mountain. In connection with the planing-mill, there is a gristmill department where feed of all kinds is ground; also corn-meal and graham flour. Feed and corn-meal are shipped to San Diego and other places by the car-load.  Custom work is done for people in Fallbrook, Escondido, Encinitas and other points. 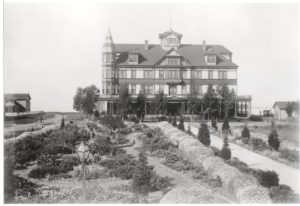 In the grist-mill business there is a competitor in the Carter & Martin Milling Company. This firm has lately put in operation a new steam engine. They roll barley and crack corn to order. They also manufacture corn-meal and graham flour. They have an extensive trade from all the surrounding country, and ship by the ton to many points on the railroad. They are also contractors and builders, and manufacture moldings, brackets, etc.

The Oceanside Fish Company are keeping their city prominently before the people of Los Angeles and San Bernardino. They began a few months ago, in a small way, to experiment at catching and selling fish. In both departments they have been successful. They catch anywhere from 500 to 2,500 pounds at a haul. One firm in Los Angeles offers to take all they can catch at 5 cents per pound. It is impossible for them to supply half of the orders they receive from Los Angeles and San Bernardino.

To help supply the demand for Oceanside fish, a Chinese company has been organized. They have built their own boat and manufactured their own nets, and propose, from the wealth of the ocean, to contribute to the wealth of Oceanside. There are millions of dollars in the fishing business on the Pacific coast, because it is possible to fish twelve months in the year here, and only seven on the Atlantic coast.

The Bank of Oceanside has contributed its full share to the prosperity of the city. The bank building itself would do credit to a city of 50,000 inhabitants. The cashier, E.S. Payne, is a gentleman of large experience and people in the city or country who do business with him, invariably return. D.H. Horne president, and the directors are among the most progressive and reliable men of the community. The business done by the banking institutions of a city is always an index of its prosperity or adversity. As the Bank of Oceanside has taken in and paid out over its counters the past year over $l,000,000, it is very fair evidence that Oceanside is not dead. This institution makes collections from any part of the Union, and transfers money to all parts of the United States and foreign countries.

The two nurseries of the city draw people from all the surrounding towns for trees, plants and shrubs. They have never been able to supply more than half the demand there is for nursery stock.

There are three stores for groceries and general merchandise. They all report business good and growing better. The summer visitors, the hotel and railroad business and the increasing number of thrifty ranchers in the country about Oceanside all contribute to make the store business a success. 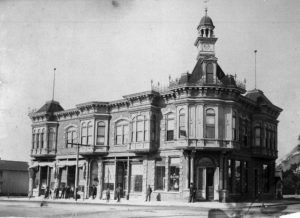 The dry-goods store reports that business has been good all through the year but very much increased in volume towards its close. The same firm established in June, 1889, what is known as the Oceanside Warehouse, an institution which is a great benefit to all this section. They handled this season 80,000 sacks of grain. They have sold 3,000 sacks of White Australian seed wheat to the farmers in this vicinity. They state that the Oceanside wharf will undoubtedly be finished by August l, and when this is done they propose to ship their grain direct from here to San Francisco, thus saving $2 per ton on freight. The material necessary to complete the wharf is here, and the stockholders propose to carry the work forward as rapidly as possible.

Among the other business enterprises of this most enterprising little city may be mentioned two excellent hotels and one or two restaurants. One of the hotel buildings cost nearly $70,000. There are two drug-stores, two livery stables, a millinery house, two boot and shoe shops, two blacksmiths, a hardware store, a harness shop, a furniture and undertaking establishment, a bakery, a barber shop and various other enterprises, including three real-estate agents, who report three times as many purchasers for acre property as there were a year since. Oceanside has three skillful medical practitioners, three good lawyers, and a flourishing newspaper. The schools are well organized and ably administered.

The churches in Oceanside are well represented. There are six organized religious bodies; Christian, Congregational, Baptist, Episcopal, Holiness and Methodist. The Episcopal and Methodist have no church building as yet but they are planning to build in the near future. The attendance upon religious services during the past year has been better than in any other year during the history of the city.